I had a problem remote desktoping to a server today - “internal error”. I eventually tracked it down to the fact that the Letsencrypt certificate we use for Remote Desktop didn’t have read permissions set for the NETWORK SERVICE to read the private key.

I’ve been trying to think of anything I may have changed. The only thing I am aware of is that I used to use my own powershell script to update the RDP certificate thumbprint in the registry and then discovered there is a built in Task to do that so switched to using that. My own script only updated the registry, it didn’t touch the certificate access permissions.

What version of Certify The Web are you using? A recent beta version (5.9.x) did have an issue related to this.

If you are just using the current release version, have you ever used the background service as a different user other than the default (Local System)? Some users try to do this (change the service account for the background service) but it’s unsupported due to the complexity of permissions (and key stores etc) involved.

Where are you checking the permissions for NETWORK SERVICE?

Do you have any other deployment tasks enabled?

I see the microsoft docs do suggest that you need to enable read for the certificate keys: Remote Desktop listener certificate configurations - Windows Server | Microsoft Learn - as a workaround you could run your own script to do this but our basic built in deployment task does not do this. From memory this is the first time this issue has come up.

I used procmon to capture and confirm the problem when I tried to remote desktop in:

There is a way to edit the permissions using icacls but I found it much easier to do it using the MMC certificate plugin (as detailed in the article you linked to). If I looked at a non-working certificate the only permissions were for system (full) and administrators (read).
(I’m a new user on this forum so it won’t let me post more than one picture)

As I said, the only thing I had changed was moving from my script to ‘Deploy to RDP Listener Service’ instead. But my script doesn’t do anything with permissions, it just writes the thumbprint to the appropriate registry key!

I’m using the current release version, 5.6.8.0. I haven’t ever used the background service as a different user other than the default (Local System). I don’t have any other deployment tasks enabled.

Edit: BTW, I realise I could have passed the Thumbprint from Certify The Web as a variable but I haven’t tried using Certify The Web variables and I already had the script to reuse.

If I looked at a non-working certificate the only permissions were for system (full) and administrators (read). 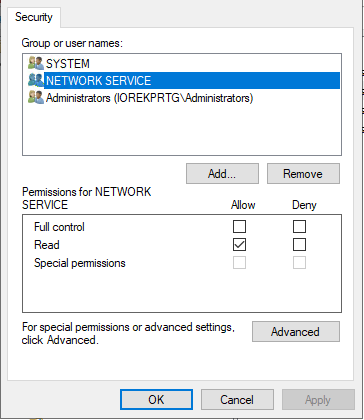 This is not an issue for me, but my certificates have the same default permissions. I don’t keep very old certificates around, so I cannot say if this behavior is recent or long-standing.

This is beyond the simple scripts we have built-in (which are here: certify-plugins/src/DeploymentTasks/Core/Providers/Assets at development · webprofusion/certify-plugins · GitHub) but I note that it has a script block to set the ACL, in this case it takes the last key written and sets the permission on that:

It’s useful to have that in case something changes and I need to set the permission as part of my own script. What remains a mystery is why the permissions change when I run my existing script, I can only assume that it is something that powershell does itself in the background but I can’t think of any reason why it would do that.